I often reflect on the content of my comic book, and how I have unconsciously absorbed the default story of a white male character (in my case a group of white male characters) on a quest. In addition I have a wise (white) female character (Chantal), who is an oracle that intends to change the likely outcome if the quest continues as it normally would.

I’ve been made aware that people of colour want to see more people like themselves in stories and movies. I must admit that I have yearned for more female perspectives in literature and movies at times, which is as close as I can come to imagining how people of colour feel about being left out of mainstream media. Similarly for people who are queer, obese or disabled.

The difficulty with comic books is that the illustrations are often caricatures that exaggerate features. It would be tricky to create a PoC character without it seeming racist. There is no opportunity in a comic book for beginners in French, which has an extremely constrained vocabulary, to make things nuanced. I think the best I can do is have a variety of skin colours across the cast of characters, and not make the bad characters the dark-skinned ones. Having a queer character _might_ be possible (more likely a queer couple, as that’s easy to do visually without resorting to stereotype appearances). Given it’s a fantasy world, I could potentially do a genderqueer character that magically goes back and forth between genders all the time. After all I have a python that can make itself look like a dragon and a large gnome. Theoretically, the same could happen with skin colour.

I received only one star from one reader on Goodreads for Episode 1, without explanation. I can only guess why, but my guess is it’s to do with it being an entirely white male cast in the first episode – apart from the griffon, which is a mixture of white, blue and brown. This is partly due to unconsciously absorbing this default – even though my various influences (mainly fairly tales, Astérix, Smurfs, and Uncle Scrooge) do have more female characters than I do in Episode 1, partly as an artifact of being a slave to word frequency lists and my rules about what to include in each episode. In Episode 1 I only use French-English cognates that look identical in both languages. As such I only use adjectives that are either identical for both genders, such as “visible”, an exact spelling for masculine nouns only, such as “certain”, or exact for feminine nouns, such as “complète” (first occurs in Episode 2). I also chose to use a very limited palette in the drawings, roughly equivalent to a typical 12-colour set of coloured pencils, crayons or felt pens.

I think my comic books will evolve to have more diversity through the series. Episode 1 is already published, so it is what it is. Episode 2 at least introduces a main female character, who, like me, tends to work on her own to solve problems – at least at this stage in the plot. Episode 3 includes new characters, but since they’re not “good” characters, I won’t make them PoC. I haven’t written the Taxi and La Question du Moment for Episode 3 yet, so there is a bit of scope there to increase diversity. At least now I’m more aware of this, and can consider it in my writing/drawing process. Stay tuned for Episode 3… Meanwhile, here is a first attempt at a PoC for my comics – a recolouring of a panel from Episode 2. Is it OK?

I sold the first “I can’t believe I’m reading French” Gnomeville comic that I listed on ebay last week, and I’ve decided it’s worth putting my comics up there to provide somewhere for people to buy them easily until I move toward having my on-line shop. Currently sales are a little too low to warrant having a shop front, but it will come. So far I’ve sold about 20 comics, and given away 14 ebook issues, but things are on the increase.

Here are a couple of photos of a comic book page spread in Episodes 1 and 2. 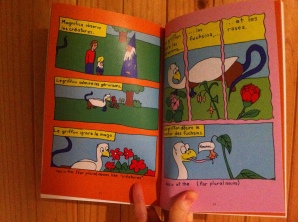 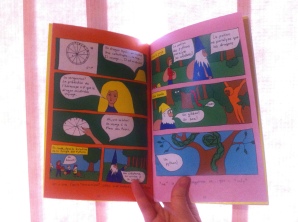 This link should help you find Gnomeville comics on ebay at any time, though it may be the Australian ebay. I have, however, set up international sales for the comics. My Gnomeville Comics products page also lists the links, if you should need them late.

The ebooks of Gnomeville comics, including previews are available on Amazon.

Episode 1 of beginner French comic Gnomeville, is currently available for free as a Kindle ebook. Write a positive review on either Amazon or Goodreads by Sunday 22nd October and get a free pdf of the crossword from the comic. The best review will receive a free narration audio file. https://www.amazon.com/Gnomeville-Episode-Introductions-Believe-Reading-ebook/dp/B01N5JGI7O/ref=sr_1_1?s=digital-text&ie=UTF8&qid=1508028141&sr=1-1

Get your download quick. Wednesday 18th is the last day (US time zone, I think).

Only four months after its launch, Gnomeville: Dragon! Episode 2: Les Potions et les Pythons is available on Amazon as an ebook. Now you can read both Episode 1 and 2 and learn the 20 most frequently occurring words in French newspapers, as well as many English-French cognates. 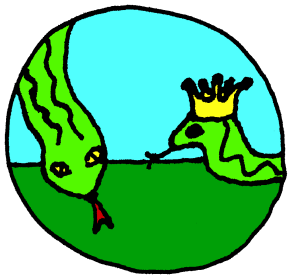 I’m launching Episode 2 of my French language comic for beginners in the French language that have English as a first (or accomplished) language. The launch happens three years after Episode 1’s launch, and both are associated with concerts of my choir. I use appropriate choir concerts as a deadline for me to push myself to complete things. It works for me, although it does wreak havoc with my health in the short term. Last time it was a concert of music from France. This time it’s a fantasy-themed concert featuring a dragon.

The concert is The Quest, an entertaining night of music interspersed with a fantasy narrative involving a dragon. Music from my second (La Potion des Pythons) and third (La Mission) comic books will be featured in the concert. The song La Mission is also available on my third album On the Rocks.

Episode 2 (and Episode 1) will be available on the night in large format comic book, which is roughly a standard comic book size. Episode 1 is also available as an ebook from Amazon, and I’m running a special countdown deal starting on the day of the concert (Thursday 1st June), so Thursday is the best day to get your copy of Episode 1 for US$0.99.

Have a look at the preview on Amazon and get ready to be entertained while reading the easiest French books you’ve seen. Then perhaps you’d like to read Episode 2.

I’m very happy that people are starting to buy the ebook edition of my comic for learners of French with an English-speaking background. I’ve had purchases from UK, Canada and USA, as well as some kindle unlimited reads. It can be deflating when nobody buys the work you’ve put your heart and soul into, but then when they do, you are inspired to keep going with the vision.

On my Facebook page, I made a special offer for people who have read the comic book to write an Amazon review in order to receive a free copy of the narration by native French speaker Jeremy Marozeau.  This offer expires at the end of the month.

It’s also not too late to receive all audio tracks on mailing magnifica@gnomevillecomics.com the Amazon kindle receipt showing purchase of episode 1.

Meanwhile, the first additional resource for episode 1 is now available. I decided to focus on fashion and celebrity for this one.  It’s mainly pictures and links to articles in French about “le total look”. I hope it’s useful for beginners in French with an interest in fashion.

After many years in development, and release in physical form in 2014, my comic is finally available as an eBook.

This is the first episode in what is arguably the easiest book in French for native English speakers. Designed to introduce one or two new words or concepts per page, and to exploit the over 1,000 words that are the same in French and English, you learn the most frequently occurring words in French, while being entertained with a story about gnomes, mages and dragons. While the series is optimised for language learning, by using sight gags and visual humour it still manages to be entertaining from the first few pages. Follow the story of Jacques, Magnifica the mage, the gnomes Didi and Dada, and the griffon as they commence a quest to capture a rogue dragon.

The book includes further stories to reinforce the vocabulary learnt so far, as well as a crossword and songs. The mp3 file of the narration by a native French speaker of the Gnomeville Episode 1 story is available from the author on email of the receipt as proof of purchase (first 500 buyers). The first 10 customers will receive all audio tracks of Episode 1 (3 stories, 2 songs), while the first 100 customers will receive the narration and one song.

The comic book has been checked by three native/near-native speakers of French to ensure authenticity. It exploits several principles of language acquisition:

In summary, this is a well-researched, well-edited, entertaining introduction to reading French via an extremely easy to read comic book. Read it before you read anything else in French. Read it now!

In my French reading, partly to continue using extensive reading, and also partly research for my writing of comic books in French, I’ve started reading more children’s books.  The J’Aime Lire series from Bayard was an excellent place to start.  They publish for specific ages: 6, 7, 8, 9, etc.  While the difficulty for a foreign language learner varies sometimes, the books for 6-8 year-olds mostly work for me, and seem to match a ~1000 word vocabulary or A2/B1 level.

One thing I found with reading children’s fantasy novels is that they are very vivid, and it is easy to become engrossed in this fantasy world, with a feeling of wonder.  I had the same experience when reading the first volume of Harry Potter (and as a child when reading Enid Blyton).  My comic book also has this vividness about it – partly because it is a brightly-coloured comic book.  I’m not sure if it is the fantasy element, the illustrations or a property of the writing that makes it so.  In the case of Harry Potter it can only have been created via the text, as I read it before seeing any movies of it.